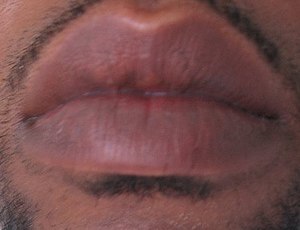 Lips are an important feature of facial aesthetics. They are also used for kissing.

Thin lips are commonly regarded as masculine. However, this is a misconception because males actually don't have thinner lips than females[1] Males have larger skulls which makes their lips appear thinner. A long chin makes the lips appear thinner as well.

Females have lips that are more plump (anterior projection).[1] Plump lips advertise youth because lips get thinner with age.[2]

Blacks have genetically thicker lips. Thick lips are useful in chewing hard foods because they protect the lips from being damaged.

In contrast, Brio93 has ugly lips.