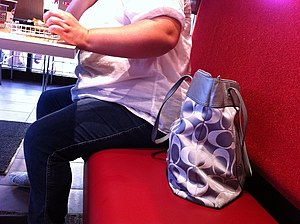 A landwhale is a pejorative term for an overweight woman that is commonly employed in various online forums (especially those connected to the manosphere). Landwhales are often accused by men of being as repulsive on the inside as they are externally, and there is indeed evidence that female obesity is correlated with behaviors and attributes that are generally considered undesirable, such as antisocial behavior,[1] lower IQ,[2] and poor impulse control.[3]

Landwhales often like to assert that they are only considered less attractive due to restrictive beauty standards pushed by the mass media, that supposedly serve to promote a male preference for “unrealistic” levels of thinness in their prospective female sexual partners. Contradicting this claim, Wang et al. (2015) conducted a study on the effect of cultural differences on perceptions of BMI (body mass index) on female physical attractiveness. Male participants from nine countries and three ethnic groups (White, Black and Asian) consistently rated the thinnest women as the most attractive (down to a minimum BMI of 19, which is at the very lowest end of the “normal weight” range).[4]

Thus, while perceptions of the relationship between BMI and physical attractiveness did vary by culture, there seems to be a strong, ingrained, biological aspect to men's general preference for thinner women. This may be related to perceptions of youthfulness, as body fay percentage generally increases with age, and also nulligravidity (not having borne children), as women that give birth tend to retain excess weight even after the pregnancy is finished.

A large portion of women in industralized societies are landwhales[edit]

Due to hormonal and other influences on body fat distribution, women both generally have a higher body fat percentage and are more prone to obesity than men. In the US for example, the CDC (Centre of Disease Control) found in 2016 that obesity rates had plateaued in American men but were still steadily among US women.[5] 40% of US women (of all ages). Although obesity rates increase steadily with age, the amount of young American women who are obese is still higher than 18.5%.[6]

The high prevalence of female obesity may play a role in increasing female choosiness and hypergamy, as it likely leads to more men competing for a smaller pool of thinner, more desirable women. However, this may only be salient when it comes to longer-term relationships that require more investment on behalf of the male, as Juggernaut law seems to imply that there will always be a sizable portion of men willing to engage in casual sex with landwhales, no matter how hideous they are, as the results of the infamous “pig woman experiment” implied.

This page contains text from an editor (Altmark) who wanted his text released under CC-BY-4.0. If using the whole page you may credit it as: Altmark et al, unless otherwise stated to credit otherwise. Most other pages on this wiki we declare as unlicensed to re-use outside of here unless expressely stated by email and under the conditions listed in the email.
Retrieved from "https://en.incelwiki.org/index.php?title=Landwhale&oldid=24305"
Hidden category: