From IncelWiki.org, the incel encyclopedia 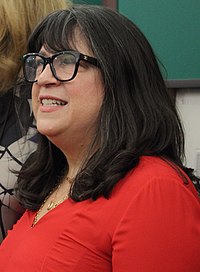 Yes, this is the author

The book sold more than the Bible.

The, “sexy part”, is supposed to be the fact that the female protagonist sells herself to a wealthy capitalist. The book proves many would sell themselves to wealthy people en masse, if allowed, in a country with high wealth inequality. The book also proves that being a complete square in dating isn’t an automatic disqualifier. The book was adapted into a 2015 film version.

Christian and Ana from the movie adaptation

This book that billions of people masturbated over is about a female college student named, “Ana”, agreeing to sign herself into a sex slavery contract with a wealthy capitalist named, “Christian”.

This book came about four years after the Great Financial Recession.

The book was originally written as a fanfiction of a romance book about a woman falling in love with a vampire.

Jordan Peterson claims the book was a reaction to increased gender equality around the globe. Other cultural critics claimed the book was a reaction to the financial recession. While others attributed the book’s success it to a continued loss of sexual taboos in society around sugar babies, driven by high college debt and diminished female economic prospects (women selling themselves: see Seeking Arrangements).

The following passage illustrates the poor writing quality as well as the comically dominating male personality so many people find sexy nowadays.

Somehow not extreme enough for some[edit]

Humbled Females[ext], a female submissive community, describes the film version of Christian Grey as “the Disneyland dom”, and didn’t consider the woman to be truly submissive enough in the film, despite being stalked and abused in the film:

The movie version of the book was protested by at least two feminists in NYC, under their organization, “Stop Patriarchy”. They criticized the movie as patriarchal, degrading to women, and promoting violence against women.[1]

File:Fifty Shades of Grey is only romantic because the guy is a billionaire - If he was living in a trailer it would be a Criminal Minds episode.webp

A UK protest equated Christian to a rapist, predator, and abuser.[3] The protests seemed to have been widespread, but each individual protest was small in numbers.

The book was protested in Norway on the grounds of it not portraying a gender equal relationship. It was also protested there for promoting violence against women. Organizations protesting it in Norway included, “Stopp Pornokulturen”, the feminist group, “Kvinnefronten”, “the Norwegian Association for Women’s Right”, “Ottar”, and “Oslo Crisis Center”, an domestic abuse crisis center.[4]

Comparison to “The Story of O”[edit]

In “The Story of O”, the woman was a public utility, sort of like an exaggerated free-love. In 50 shades of Grey, the woman is literal contractual property of a wealthy man, and by virtue of him being wealthy. Serious cultural regression.

This page borrows from Kings Wiki. Borrowed material has been altered. Text is licensed under Creative Commons Attribution-ShareAlike 3.0 Unported (CC BY-SA 3.0). Unchanged text is credited to the authors of the Kings Wiki page here.
Retrieved from "https://en.incelwiki.org/index.php?title=Fifty_Shades_of_Grey_(book)&oldid=25297"
Categories:
Hidden categories: