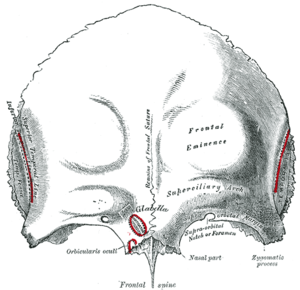 The brow ridge or supraorbital ridge is the bony protrusion of the upper eye socket. Its function is to protect the eyes and acts as a reinforcement for the eye socket itself against fracture.

Males, compared to females, generally have more protrusive supraorbital rims. It's a feature of facial masculinity.

The browridge is widely viewed as a Chad characteristic in the incelosphere.

Among primates and apes, including humans, the brow ridge has been argued to have evolved due to mastication since the muscle which involved in mastication creates a pressure on the brow ridge bone.[1][2][3] Men have more pronounced and square brow ridges, closer to that of great apes, while women's eyebrows are roundish and less protruding, closer to the anatomy of babies (see neoteny).

This page, created on or after 2018, initially and currently uses 2016/2017 text from Redpilltalk Wiki previously known as SluthateWiki. Redpilltalk/sluthate wiki preceded this wiki and incels dot wiki. Borrowed material has been altered. Text has been deemed Fair Use for this non-profit wiki. Unchanged text is credited to the authors of the 2016/2017 RedpillTalk wiki page here.
Retrieved from "https://en.incelwiki.org/index.php?title=Browridge&oldid=26556"
Categories: