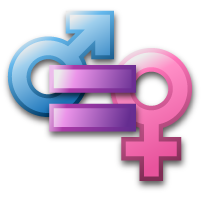 Anti-sexism, or gender egalitarianism, refers to the belief that men and women should have equal rights and that sex discrimination is unjust. The term is often used by purplepillers who reject both feminism and masculinism in favor of this more neutral, pro-equality stance.

With the birth of the purplepill movement on Reddit as well as the birth of BreadTube, anti-sexism has become increasingly popular among incel communities. However, this fact remains largely ignored by liberals, radfems, and leftists on social media.

Many, "blackpilled", and, "redpilled", manospherians reject gender equality on the basis of, "returning to patriarchy". In the US, patriarchalcels often advocate taking voting rights away from women, usually by advocating for the repeal of the nineteenth amendment of their constitution.

Anti-sexists respond by getting angry, advocating female autonomy, citing technological and cultural progress with liberated sexuality, or point out to patriarchelcels that even men weren't that privileged in patriarchy.

Many purplepillers self-identify as anti-sexist, considering themselves post-feminist and post-masculinist. They often criticize both feminists and masculinists for only seeing things through one perspective. Some anti-sexists argue that identifying as an activist for one gender in particular, while upholding the idea of gender equality, is hypocritical.

Lack of feminist support among anti-sexists[edit]

Some anti-sexists consider themselves feminists only when considering women in second and third-world nations, where women are genuinely treated as second-class citizens. They therefore support women's rights movements in extremely sexist, conservative countries, such as the Women's Protection Units in Syria Kurdistan. Most anti-sexists agree that feminism in the West is either no longer needed, or does not fight for actual equality. Despite their willingness to fight sexism, many gender egalitarians are quickly, "cancelled" (aka deplatformed), by various groups, such as by BreadTube fans.

Some anti-sexists argue that while the elitest of the elite in society are largely men, average women are protected and average men are seen as cannon-fodder. This worldview conflicts with the feminist notions of “male privilege” and an objective “Patriarchy”.

Feminists often criticize gender egalitarianism by arguing that feminism already aims to achieve the equality of the sexes. Anti-sexists respond to this by noting that, in practice as opposed to theory, feminism only focuses on women's issues, and that the term "feminism" is itself biased.